Can Cold Sores Be Caused by a Gluten Intolerance or Sensitivity?

Born from the herpes virus, cold sores are NOT the direct result of gluten intolerance. While it is possible for an outbreak to be triggered by a compromised immune system, fever blisters are never due to a gastrointestinal problem.

Gluten-related issues can take a toll on your immune health. This can result in the appearance of canker sores in the mouth as well as a host of more significant issues within the small intestine.

You will find out more about gluten sensitivity, celiac disease, and how each can ‘potentially’ trigger a cold sore outbreak. You will also learn about food allergies and which selections can make the problem worse.

The physical response to gluten protein (found in barley, rye, and wheat) causes both gluten sensitivity as well as celiac disease. However, these conditions are entirely different even though their symptoms are virtually identical. Only medical testing can determine which one is responsible.

This severe medical issue is caused when your immune system attacks the lining of your small intestine. Causing intestinal damage over time, celiac disease can lead to malnutrition and osteoporosis. In extremely rare cases your small intestine can become so riddled with problems that cancer can occur. All of these issues are the result of your body rebelling against gluten intake.

Classified as an autoimmune condition, celiac disease is not caused by gluten, but rather how your body reacts to the protein itself.[1] If you have celiac disease your body, by default, will attack the lining of your small intestine. In layman’s terms, it is a reactionary condition. Research shows that roughly 1 in 133 people have celiac disease.

The medical jury is still very much out on this condition. In fact, there is a question as to whether it is a condition at all.

The consensus is that a person with sensitivity has a direct reaction to gluten consumption. Unlike celiac disease, gluten sensitivity causes inflammation of the digestive tract rather than your own body turning against you.[2]

It has become common practice to use deductive reasoning when dealing with sensitivity. If you experience inflammation within your digestive system when eating gluten but yet are symptom-free while entertaining a gluten-free diet, the conclusion could be gluten intolerance.

Do Cold Sores Have a Connection to Gluten?

While there is no direct medical connection between cold sores and gluten the possibility is not zero. Because poor immune health can lead to a fever blister outbreak, stomach and digestive issues could be a trigger for some people.

Whenever your body is forced to deal with a condition, regardless of what it is, your immune system becomes compromised. If your health is in turmoil, then you often become susceptible to other ailments. In the case of gluten concerns, if your body is having to deal with gastrointestinal issues it might not have the means to prevent a cold sore outbreak.

Because HSV-1 is indeed a virus, not having all hands on deck can be an issue. This is why it is vital to stay healthy. Even something as seemingly innocent as the common cold can potentially awaken HSV-1 and result in a cold sore outbreak.

While gluten concerns will never be the direct cause a cold sore, the general wear and tear it could have on your immune system could cause a fever blister to develop.

While the answer is not a definitive “yes” it is mighty hard to think celiac disease would have no consequence at all. Unlike gluten sensitivity, celiac disease is a severe autoimmune issue where the body begins to attack itself. This type of alarming disease would naturally leave the body open to attack by a host of internal and external forces causing variety of extraintestinal manifestations.[3]

If you are familiar with the basic cold sore triggers, you know that illness and stress are common triggers. So are dietary concerns. When discussing the topic of celiac disease, all three of these issues are at the forefront.

While there is nothing 100% conclusive, there has long since been a school of thought that foods high in the amino acid known as arginine can trigger cold sores. Unfortunately for HSV-1 sufferers, arginine is found in many favorite foods across the board.

These foods (and drink) selections include:

To avoid the trigger of arginine, it is important to find foods that have a high lysine to arginine ratio. Items such as fish, lean turkey, and lean beef are three of the most common choices.

What is the Difference Between Celiac Mouth Sores and Cold Sores?

It is common to develop mouth sores if you have gastrointestinal issues when the ailment is severe and prolonged. When it comes to the direct topic of celiac disease, most mouth sores associated with this disease are canker sores...not cold sores.[4]

Canker sores are simple nodules of tissue that develop when your mouth becomes irritated. These sores form on the inside of your mouth. Most notable within the lining of your cheeks. While certain foods, gum chewing, and dental procedures can cause canker sores, illness can promote them as well. This is why canker sores are relatively common in those who suffer from celiac disease.

Cold sores, on the other hand, are born of the herpes virus and have nothing to do with any other condition. While celiac disease could trigger a cold sore outbreak if you carry HSV-1, you will not get a cold sore from celiac disease as the two have no connection. 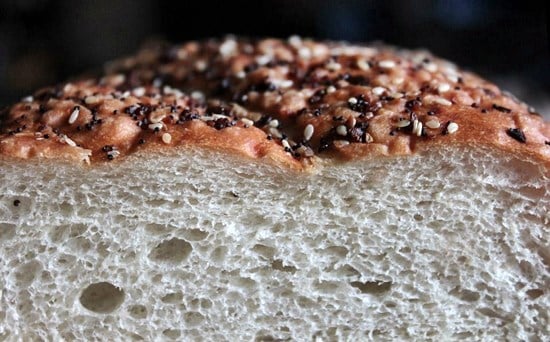 How Do You Treat Gluten Intolerance Naturally?

The best way to treat gluten intolerance is through dietary changes. The elimination of barley, rye, and wheat from your diet is essential. It is also paramount to connect the dots at is relates to other foods. The “big three” as they are often described are found in a plethora of other foods that might not draw your attention. For example, many soups, sauces, and salad dressings contain wheat.

If you have been diagnosed with either celiac disease or a general gluten sensitivity, your primary physician will likely provide you with a “gluten-free” diet plan. This will enable you to simple selects foods from a chart rather than conduct research on your own. Learning the ropes of a gluten-free diet is half the battle. In the other hand, if you are not diagnosed with any of gluten-related conditions, avoiding gluten can do more harm than good.[5]

There is no direct connection between cold sores and gluten intolerance. While Celiac disease and general gluten sensitivity are severe issues in their own right, they have no connection to cold sores. Although poor immune health caused by a gluten-related ailment can trigger a cold sore, it will never produce one in the most literal sense.

Cold sores are born from the herpes virus. Therefore, they stand alone and can never be the direct result of any other medical issue.

If you are concerned about your oral health, whether it be cold sores or canker sores, you are advised to consult your physician. This is especially true if your mouth issues have come on the heels of a celiac disease diagnosis.