Cold sores have painful symptoms. Facial nerve pain after the herpes simplex virus (HSV-1) has been activated is less common, but it can occur. Other medical conditions affect the nerves in the face, so a self-diagnosis can be difficult.

Responsible for most of your facial sensations, the trigeminal nerve is adversely affected by HSV-1. This is where the virus resides before traveling down the nerve to the area of the lips and mouth (the position where you got your first cold sore). This same nerve can also be compromised during more common illnesses, such as cold and flu.

While nerve issues in the face can be long-term in some cases, most forms of facial pain will go away when they’re given sufficient time. When HSV-1 returns to a dormant state, the trigeminal nerve should return to its natural state as well. The pain should go away on its own.

We will provide more information about facial pain, trigeminal neuralgia, and how it can be effectively treated. We’ll also look at an ailment known as post-herpetic neuralgia and how it can sometimes be connected to shingles.

Can Cold Sores Cause Face Pain?

Cold sores can introduce many uncomfortable symptoms, and some can affect the face and eyes. Because HSV-1 is a virus, many of the signs are similar to a cold or flu. In the same way that a body that aches and experiences joint pain are signs of influenza, the same applies to severe cold sores.

Because the trigeminal nerve is responsible for virtually every facial sensation, a viral attack can result in some harsh symptoms. The issue is described as “shock waves” throughout the face.

Although face and eye pain are uncommon, they can occur. If you are in the midst of a primary cold sore infection, your symptoms could include extreme facial discomfort.

Some medical conditions that can directly impact the trigeminal nerve are as follows:

Noted below are a few known actions that can cause trigeminal neuralgia:

Can You Get Trigeminal Neuralgia from a Cold Sore?

It is highly unlikely that an aggressive cold sore outbreak will leave you with trigeminal neuralgia. While fever blisters can aggravate the trigeminal nerve, the “shock wave” sensations will usually vanish once the virus has run its course.

If you develop long-term trigeminal neuralgia, there is a chance that something else is to blame. Trigeminal neuralgia primarily involves some form of nerve damage. This is why it is unlikely that a cold sore outbreak would damage it. For example purposes, this would be similar to a case of the flu leading to long-term facial nerve issues. It’s unlikely to happen.

If you are experiencing extreme facial sensitivity following an outbreak, you should consult your physician. Facial pain (of any type) following cold sores is not typically a symptom. It’s even rarer if several weeks have passed since the cold sore healing stage concluded.

Do I Have Shingles or Trigeminal Neuralgia?

There is also a controversial school of thought on a condition known as post-herpetic neuralgia and how it could be related to shingles.

Shingles, also known as herpes zoster, is a reactivation of chicken pox which causes a very painful rash. It also introduces a sensory disorder which leads to a “pins and needles” sensation across the coverage area. Most commonly the “trunk” of the body.

This same sensation is what most trigeminal neuralgia sufferers report. Post-herpetic neuralgia is the concept that shingles, once healed, can introduce long-standing neuralgia.

While nothing is conclusive, shingles can leave behind severe nerve damage in severe cases. If you have had shingles and are experiencing nerve pain, we encourage you to consult your physician. It is not out of the realm of possibility that your ailment is the result of shingles that have compromised your nerves in some way. 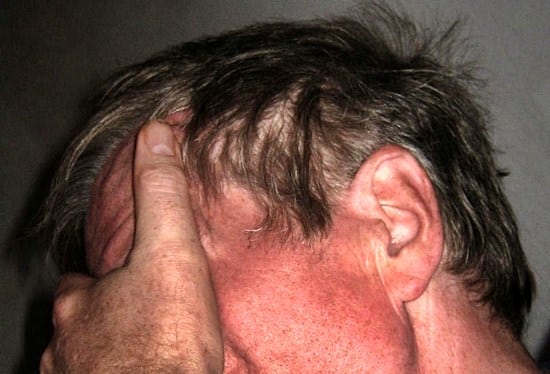 What Can I Do to Reduce the Pain Quickly?

If you are experiencing facial nerve pain, there are a host of medications and treatments available. This goes for standard nerve pain in addition to a definite diagnosis of trigeminal neuralgia.

Here are some of your treatment options:

Facial pain, ear pain, headache, fatigue, etc. can all occur. If your facial pain has continued weeks after your cold sore has healed, then you should seek the guidance of a medical professional. It’s very unlikely to be caused by cold sores at this stage.

Why Did My Cold Sore Scab Turn Black?